Last night I handed in my last assignment for EA300 Children’s Literature with the Open University.  After 9 months of hard work (the worst of it seems to have been over the last 3 weeks) I’m glad it’s over and my weekends and evenings become my own again.
But I have enjoyed the course, hard work though it was.  I was a little worried that studying some of my old favourite books like Swallows and Amazons or Tom’s Midnight Garden might spoil them for me but if anything they have been enhanced by the academic essays and course materials.  And I’ve met some new books which will become old favourite like Philip Reeve’s Mortal Engines and Mildred D. Taylor’s Roll of Thunder Hear my Cry.  I also took the opportunity to read as many children’s books as possible over the last 9 months including some I read as a child and I think this added to my understanding of some of the issues we studied.
As someone who writes fiction I’ve also found the insight into why writers have done something and how the history of children’s literature has influenced their writing over the years fascinating and I hope useful to my writing not just my essays.
I may never trust Disney again, and I remembered my hate of writing essays very quickly but the course materials were so interesting I have no regrets.
So now I await my results which should arrive sometime in the summer and try and decide if I should do another one.  With only two more courses needed (or 120 credits, 60 each) to be awarded a degree it is quite tempting.  It helps that I’ve seen a couple of course that interest me.  I wonder what ‘im outdoors would say…

Posted by Wild Creations at 09:36 3 comments

I recently realised quite how much weight I’ve put on in the past few years, no doubt partly my own fault for making tasty cakes every week. It was a bit of a shock really, subconsciously I knew I’d been putting it on, but to see the numbers on the scales really bought it home to me.  I already attend the gym twice a week, but I decided it was time I raised my game, along with cutting down on the cake.  ‘im outdoors is happy with that – more for him.

In February I started running as part of my gym routine.  To many people this won’t seem that big a deal but at that point even running for 1 minute on the treadmill had me feeling like I was going to die.  Over the past 4 months I’ve worked on this and can now run for 7 minutes, covering 1.14km.
This from the girl who HATED PE and running at school (probably partly because of how clumsy I was – you should see my knees, and partly due to the reluctance to shower in front of my school colleagues).
So as a reward for the last 9 months of studying and for (hopefully) hitting the 10 minute mark on the treadmill, I am going to buy myself a proper pair of running shoes.  I am going to walk into one of those scary specialist shops and ask them what they recommend.  Then feeling a bit more confident ‘cos I’ve already managed 10 minutes on the treadmill, and I’ve got some good comfy shoes, I’m going to venture outside.  Notice all the positive words I’ve used in this paragraph!
My new favourite website – Running4women
I know this isn’t about something I’ve created, but I’ve got a feeling that this is going to become a large part of my life, along with the writing, making, and studying.

Posted by Wild Creations at 15:02 0 comments 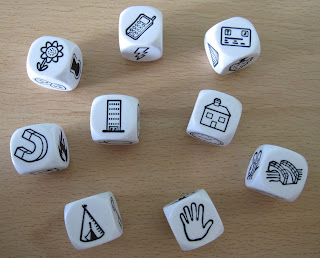 We had a Creative Writers meeting today.  Even with all the stress of trying to write my final assignment for the Children’s Literature course (due in next week and still missing 850 words) I managed to write a short one page story.
It seemed to go down well.  It took its inspiration from an article on nature deficit disorder which I recently read.
Then as an activity and as homework I bought out my storycubes.  These were recently given to me as a late birthday present from a friend (thank you!), and I’ve been dying to give them a go.
The set contains 9 cubes with an image on each side of each cube.  The idea is to roll the cubes and then use the images to create a story.  (apparently you should start with ‘Once upon a time…’)
See the above image to see a selection of images to use for this weeks homework.  The aim is to use all nine images in your story.  Its up to you what the image should mean – there are many different levels.  For instance the sheep could be a simple farm yard animal, or a sheep skin rug, or a black sheep of the family etc.

Posted by Wild Creations at 15:18 0 comments

It’s taken a while but I’m very pleased to say that the Garden Escapes website is now live.  Jen and Nick who run Garden Escapes are old friends from when I was at landscaping college, where I also met ‘im outdoors.  When they saw the Thrive Landscapes website I created a few years back, they asked me to design them one.
The process could have been a lot quicker but we are all very busy people and there always seemed to be months between meetings.  But it is live now and I’m very pleased with the end result.  It has meant learning how to use dreamweaver, but I’m all for learning new things.
Now back to the essay…

Posted by Wild Creations at 14:16 0 comments 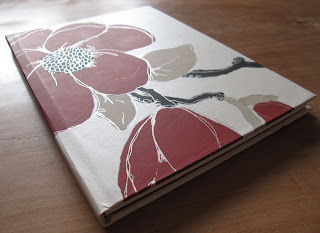 Easter seems so long ago now.  I was lucky enough to have 2 weeks away from work and spent the time enjoying the sunshine and working on a large ‘to do list’.  My Egyptian photos have now been printed off and put in an album, all the windows in the flat have been cleaned and my penultimate assignment has been written and set for marking, amongst other things.
I also finally had a chance to use the lovely wall paper what I found a while back.  Although I only made a small book I’m very happy with the outcome.  I just wish I could work out a way to photograph them that showed them at their best.

Posted by Wild Creations at 17:18 0 comments