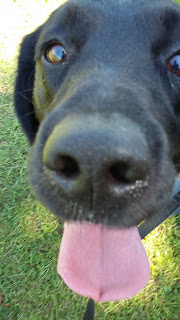 Me and 'im outdoors have been talking about getting a dog forever.  But in the flat it wouldn't have worked - a whole set of steps and a garden gate to go through before being free to roam.
Now we have a house with a nice big garden and a woodland behind, it suddenly became a possibility.  And with the utility room finished we started talking about it seriously. 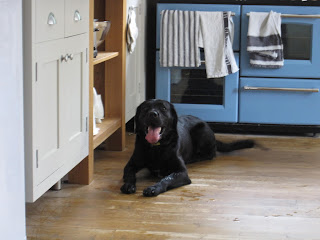 Although we would have liked a puppy we decided that there were so many dogs that need rehoming we should start by looking there.  So one Sunday afternoon at the beginning of June we made the trip out to the Dog Trust centre at Shoreham, being our nearest centre even though it's still over an hours drive away. 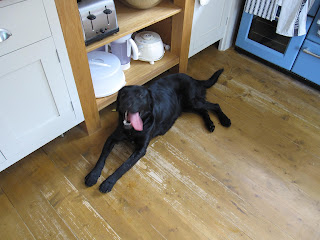 There were many dogs who we liked, but most of them wouldn't be able to deal with going to work with 'im outdoors, which was the only way we can have a dog.  No one wants to be left by themselves for 8 hours every day.
After registering our interest and having a good chat with the ladies at the centre we left wondering how long it would take to find someone to live with us. 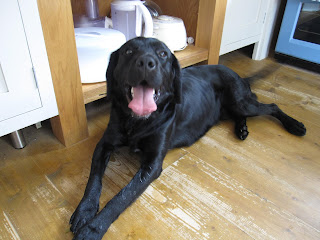 3 days later and I received a phone call from the Trust.  Were we still interested in a dog.  Yes, I say.  Then they had a 3 year old black Lab called Milo who might interest us.
So the next weekend, on nearly the hottest day of the year so far, we drove down to meet him.  Apparently he is a stray from Wales so Milo isn't his real name, which is why he ignored us when we called him by it.  Otherwise he is a real sweetie.  Very quiet, loves a ball, polite with other dogs but pulls on the lead a bit.  I can't believe anyone would have let him go, but the Trust ladies told us that while it could just be someone had got fed up of him, it was more likely that they had lost their job and couldn't look after him any more or something equally sad. 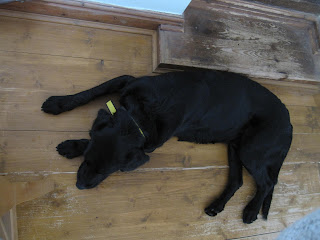 After visiting him again, having a house visit to make sure the garden was safe and secure and attending an adoption talk - all about dog behaviour and how to help him settle in to his new home, we were able to bring him home. 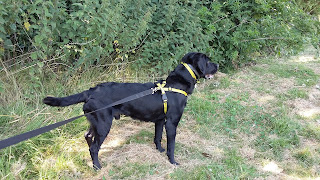 My car will never be the same!  But mostly he will travel in the truck so that will be better.
Then we had a quiet weekend to bond, mostly with a set of tennis balls and a squeaky chicken. He's a little under weight at the moment so he's on 3 meals a day until he puts on 3kg and I hope to build him up to running with me.
So while we know our lives will never be the same again we very much hope that Milo has now found his forever home. 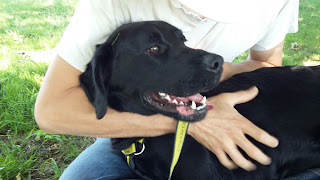 Posted by Wild Creations at 13:27 0 comments 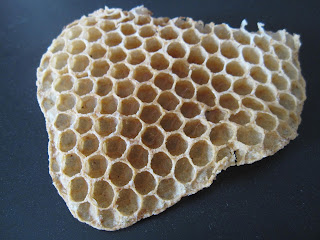 So a couple of weeks ago I decided I needed some bees wax.  Apparently its very good for making cotton easier to work with when sewing and book binding; more about that project in another post.
I didn’t really want to get it on Amazon, so decided to visit our local market town and see if the sewing shop there had any.
I couldn’t see any so asked the lady in the shop.  She didn’t think they had any and as I was turning away to try another plan, a customer in the shop asked ‘Did you want some bees wax?’ 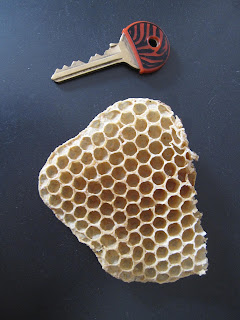 I said yes I did and she explained that she was a local bee keeper and she has just cut off some excess wax from one of her frames which I could have if I wanted.
Not really knowing what to expect I agreed and we (me and 'im outdoors) drove out to one of the small villages in the area to find a house on top of a hill with a beech hedge (the actually instructions we were given). 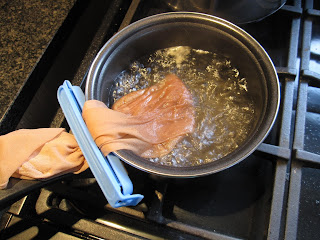 We actually got there before she did and had to explain to her poor husband why we were knocking on the door!
However after a chat and a cup of tea we left with a beautiful piece of comb and the promise of more later if I want it.
Once home I had to work out what to do with it.  I couldn’t just use it as it was as it would just crumble and it needed cleaning. 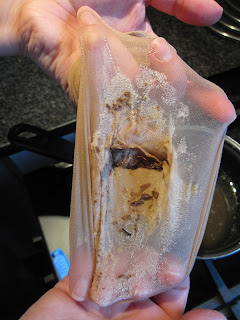 After a bit of research I tried boiling it.  To do this you need to place the comb in something so all the imperfections are captured and you end up with clean wax.  An old pair of tights were perfect. 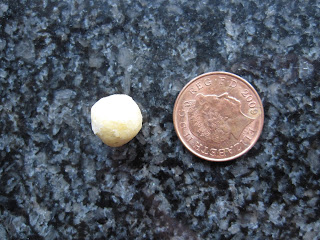 Although the piece of comb was quite big, once you melt it down and form it into a ball there isn't really that much there which I think makes it even more amazing.
Anyway there should be enough for my project, more about that later.

Posted by Wild Creations at 18:50 0 comments