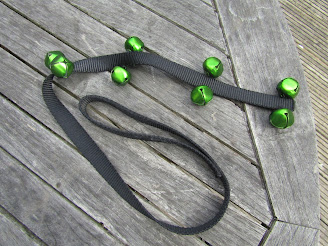 We're finally working on our kitchen which is really exciting.  I can't wait to have it finished!  However we have come to the conclusion that we won't be able to have a dog flap in the new kitchen.

Milo has a trick of opening doors, which is fine in the summer, but less good in the winter as he's not very good at closing them after himself.  So we put in a dog flap for him which meant he could come and go as he pleased and we didn't have to keep getting up to close the door after him.

Talking to a colleague they told me they were training their dog to ring a bell when it wanted to go outside.  I did a bit of research and found this is a thing!  So I bought some bells from the local wool shop, and attached them to a broken lead (he chewed through it) to create a set of bells that can be hung from a door. 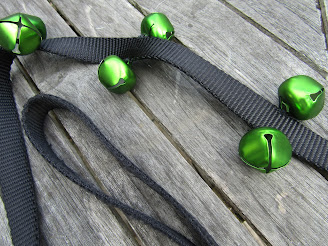 The idea is that he will then ring the bells when he wants to go out and won't scratch the new doors.  It also has the added benefit of being able to take it with us when we visit people and hanging it on their door.

So the only thing to do now is to teach him how to use it.  Fingers crossed.