I went to the writers group today.
Last months homework was to write about something we love and something we hate. So I wrote about summer which I love and people who drop litter which I hate.

The High Street was full of life, the sunshine bringing out the best; girls in summer dresses; guys without their shirts going pink in the sun; little cafes with clusters of tables and chairs on the pavements enjoying a mixture of sun and shade from the plane trees which paraded down the street hiding their flaky skin with huge pointy leaves.
And the worst; the car in front seemed to vibrate from the bass which pumped out of its wound down windows, causing heads to turn as it slowly manoeuvred down the street, stuck in the summer traffic.
I sat in my little car behind. I’d given up listening to my own music, as it was over powered by theirs. By the amount of arms poking out the windows I wondered if it was full of monkeys, but could see it was just a group of wiggers.
White boys trying to be black.
They were trying hard, with the loud hip hop and the sunglasses and gold chains, but everyone knows black boys do it better and they just looked pathetic to me.
Even more so when one of them chucked a wrapper of some kind out of the side window. I wanted to get out of my car and tell them what I think of that sort of behaviour, but even if they were pathetic they were still 4 guys, bigger than me, and more aggressive, just looking for a reason to start on someone.
I sat and fumed in my car.
We were stuck at traffic lights now, and I watched as people walked across the road, not always on the crossing.
Distracted as I was, I didn’t see where the little old lady came from, but she appeared at the side of their vibrating car. Wrapped in a thick coat and woolly hat even in the sun, she came dragging a red shopping basket behind her.
‘We don’t want any of that.’ I heard her say over the sound of the pumping beat. This was met with jeers from the boys in the car.
She bent slowly, and retrieved the shiny wrapper from the ground.
I don’t know how she did it, it was only a chocolate bar wrapper at best, maybe the wind caught it, maybe there was still some chocolate bar left in it. Whatever it was, she managed to make it fly through the air and sail through their open window, and maybe it was my imagination but the car seemed to shudder and roll as the sliver wrapper dropped inside.
Before the boys could react the traffic lights turned green and I beeped my horn to move them on.
I couldn’t help but give the old girl the thumbs up as I went past, but I don’t think she saw me.

It seemed to go down well, although I found it quite hard to write.
Next months starts with, ‘I don’t know why I agreed to this…’ Sounds like fun.

Posted by Wild Creations at 14:29 0 comments

Well I’m sure I’m not the only person starting to panic a little with Christmas right round the corner – one girl in my office already has her Christmas lights up!!!
Anyway the perfect place for inspiration is Rare Bird Finds. They have a huge and very varied selections of stuff – sadly mostly American, which if you order soon I’m sure will be here in time, or at least could give you inspiration for something similar here in the UK.
I also love that it changes every day meaning there is always something new to see. Today I love the Greenaid Shopping Tote and the Fingerfood plates.
So go and have a look for your self and who knows what you might find.

Posted by Wild Creations at 12:44 0 comments 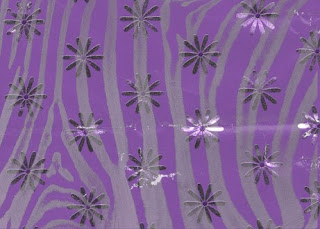 Monday night was the last session in the Photoshop classes I’ve been attending. It was a really nice session, where we talked about the different file types we can use and other last minute questions that we had.
I’ve really enjoyed the course and feel I’ve learnt so much; its given me an urge to learn about the other adobe products Illustrator and InDesign. The possibilities feel endless, you can go as far as you can imagine.
I love the above, a mix of some daisy wrapping paper and a zebra – this is what I want to be able to cover my little books in – my very own paper! So I guess I just need to find a friendly printer, who won’t mind me asking for weird prints like this. I can’t wait.

Posted by Wild Creations at 20:50 0 comments

Hello, sorry I’ve been so slow to post this week, it’s been pretty busy. ‘im outdoors has been here all week working on a patio for my parents, so I’ve had no time for anything else.
Today I went to the Christmas Craft Fair at South Hill Park.
I can’t believe how many stalls they managed to fit in, every time you went round a corner there was another one. Most seemed to be jewellery, with ceramics and knitting thrown in. There was also a stall selling yew boxes, I’ve seen him before and already own one, and a stall selling didgeridoos and bamboo flutes.
It was great to just walk round and look at what other people do, something it’s hard to do normally. The atmosphere was great and I loved the stall holders who were working on products so you could see what they were doing. One lady was caving an elephant out of a huge block of clay.
I did notice a distinct lack of little handmade books thought, so maybe something to aim for?

Posted by Wild Creations at 16:03 0 comments

The One Minute Writer

I have just found another brilliant blog. It is called The One Minute Writer, and gives daily prompts to write about. You’re meant to just spend a minute to start with but I guess if it gives you an idea or the flow feels good, there is nothing to stop you from going on.
Here’s what I wrote for today’s prompt: Write about a memorable party or gathering you attended.

My favorite party so far has been in Richmond Park in London.
It was the middle of summer – a hot sunny day with no clouds. So we traipsed up the hill, passed all the shops and hustle and bustle of Richmond until suddenly although you can see London, you are in the middle of a park.
We found the perfect spot under some trees and spread out our picnic. Everyone had bought something and we stuffed ourselves with fresh French bread and salad and pimms and cake. We left as it got dark and stopped half way down the hill at a pub. Here we sat out in the warm evening and watched fire works over London.

This is a great site for someone who wants to write but doesn’t know where to start or is feeling blocked. And there is no reason why you would have to write prose and not, say, poems. You can write anything and it doesn’t matter what, but who knows where it might lead.

Posted by Wild Creations at 16:50 0 comments 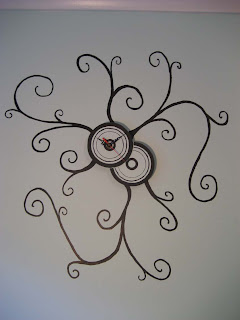 ‘im outdoors thinks I should tell you about my clock, so here goes.
I needed a clock for my room, but all the ones I’ve seen are pretty dull or very expensive and none were quite right.
So during a boring bit at work I started to doodle and came up with a rough draft.
I fiddled about with it a bit, then with mums OHP and some black acrylic paint I was off. I think it only took about a morning to paint it with a little longer for the clock face.
If I did it again I’d do the clock face a little different, but other than that I really like it, although I’d like longer hands.
And of course it does the job I made it for in the first place so it can’t be bad.

Posted by Wild Creations at 11:58 0 comments 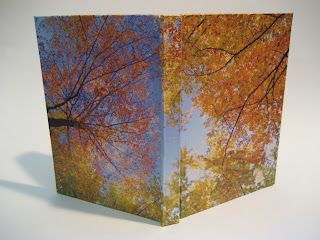 I have made a new book, using a page of the October 2008 RSPB magazine. It was the second page in, and as soon as I saw it, I knew it had to be used. The only problem with it is the thinness of the paper. It means that it has bubbled in places and I’m afraid the spine will twist or rip.
But the picture is worth it. I’m always on the look out for something special and this defiantly is. It’s the sort of photo I long to capture and makes me think of crisp autumn days where I’d rather be out in the woods crunching over newly fallen leaves than stuck in an office.
If I find more magazine pages like this I shall have to look at how to strengthen them before I use them. One advantage of the wall paper is that it is very strong to start with.
And I’ve started to think about the use of my own photos to cover the books?
Now there’s a thought.

Posted by Wild Creations at 12:34 0 comments 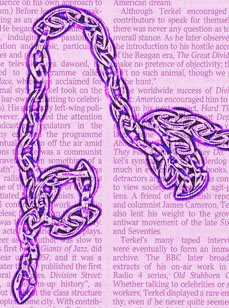 This week in the Photoshop course we were using the scanner. Kate had asked us to bring things in to scan last week so I took some wrapping paper, a map and a napkin. But then she scanned her necklace and I just had to use that with some news print.
I really love the scanner. It means that I can do what I used to when I was making collages by sticking stuff to a bit of paper, but now I have an even wider range of stuff to use. I couldn’t have stuck Kate’s necklace to my collage but I can scan it in.
Leaves, shoes, hands, metal, glass, jewelry, cotton, anything you can think of.
And having seen that scanners are no longer that pricy I’m starting to think that I might treat myself! Maybe.

Posted by Wild Creations at 20:39 0 comments

The Rock and Gem Show

I went to the Rock and Gem Show today with mum at Kempton Park Racecourse.
I’ve been a couple of times and I’m always amazed at the variety of different colours, shapes and sizes of rocks and gems you can find there.
I was really on the look out for beads and findings (the clasps etc that go with the beads if you’re making a necklace) but didn’t see any I liked.
What I really need is the Bead and Gem Show, but I’m not sure when the next one is. I went to one in Farnham in July and found some lovely beads which I’ve made into necklaces, so was hoping to make some more.
Guess I’ll just have to wait.

Posted by Wild Creations at 17:37 0 comments