On Friday me and 'im outdoors became the proud owners of our very own flat. We've been looking since Christmas and found this one at Easter and we've been very lucky how quickly its all gone through. It does however mean that I'm going to be a little quiet on here for a while, while we sort our selves out and get settled in.
Do you want a look round? 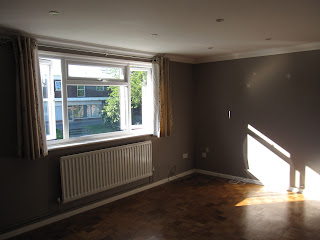 This is our living room. Plently of room for a sofa, TV and dinning room table and chairs. It also has a great view of the gliders, that take off from the hill above us. 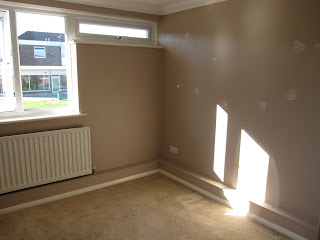 This will be the study. Lots of room in here for two desks and a big work bench. It also has a built in cupboard which will be great for storing art materials. Oh yeah and 'im outdoors accounts. 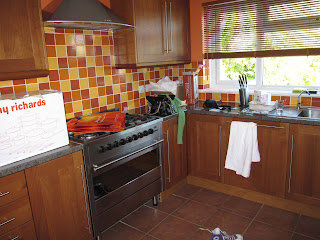 This as I'm sure you can see is the kitchin. Its a lovely size and thats a 6 burner oven there. I can't wait to start baking, neither can 'im outdoors. 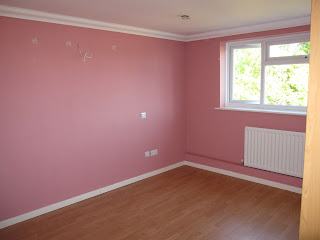 This is the bedroom. 'im outdoors doesn't like the pink, so we'll be painting that green in the very near future. The bed is on order and due in about 10 days, so we better get a move on. 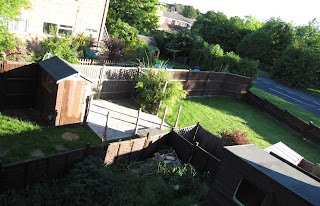 And this is the garden. Or some of it, as it was pretty hard to get it all in the photo. Its a great size compaired to some of the other gardens here. And it seems to get the sun for most of the day. This is early evening and the deck has had the sun since before lunch! It is a bit of an odd shape though. A nice challange for 'im outdoors. 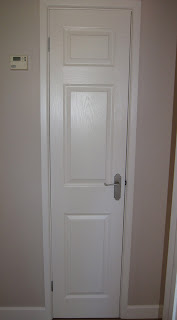 And I just had to include this photo. I love the fact that we have a really thin door to keep our mops and brushes behind. Isn't it cute!
So that is our new flat. I just have to say thank you so much to 'im outdoors for all the work he's done to make this possable. Without his constance chasing of estate agents etc we'd still be waiting. Thanks and I love you!
I'll post some more photos when we've got some stuff in it. I'm really looking forward to having a huge study to work from. It's all very exciting.

Posted by Wild Creations at 11:49 2 comments

Blimey it's been ages!

Blimey it's been ages! Sorry about that. I’ve been rather busy the last couple of weeks. This is the last week of semester, and we’ve been busy with exams and this week exam boards. So much to do before the little darlings all disappear for 4 months and peace descends.
Also as you might have guessed from the odd comment I’ve made me and ‘im outdoors are in the process of buying ourselves a flat. More details of that when I have them, but it does mean I’ve been going through the junk I’ve collected over the last 28 years. As you can imagine that’s taking some time.
And as if that’s not enough I’ve been working my way through the last CWI text book on my course – meaning that I’ll be having exams at some point in the near future! Scary biscuits.

So with all that going on I’ve had little chance to create, which is a shame as that’s what I love best. But I did have a chance to do a tiny bit of writing for today’s writers group – I never thought I’d be glad to be called in for emergency invigilation!
Last months homework was to use another of the first lines that Anne had given us as a starting point. As I said then you can’t use the first line – it’s someone else’s work, but there is nothing to stop you being inspired by it.
This time I used ‘Can I explain why I wanted to jump off the top of a tower-block?’ (it was the only one I could remember stuck in the exam room.)
When I’d finished it, I thought it would work really well as a piece of flash fiction – this is normally writing that doesn’t go much bigger than 150 words, but could be as small as 6! Good luck with that.
Here’s what I wrote.

Standing on the top of a tower block I looked at the crowd gathered below. Vultures. Police lights strobbed across faces. The wind howled round the sides of the building trying to dislodge me, but I wasn’t going until I was ready.
I can’t say I wasn’t scared, cos I was. If it was up to me I’d do it another way, but once you get to my status there is no choice anymore.
I now stood with my toes sticking over the side, flexing to grip as the wind gave me another shove.
I was suddenly blinded as they finally managed to get their spot light working.
As the sky darkened and with the light in my eyes, I pulled the ropes towards me and started down the steep decent.
Much as I hate heights I guess it was better than being gunged for charity.

That’s 146 words and I think it tells its story just fine.
I hope there won’t be such a delay before I’m back – hopefully with good news.

Posted by Wild Creations at 20:02 2 comments 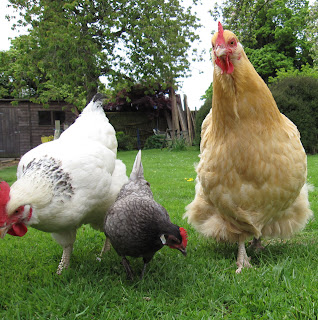 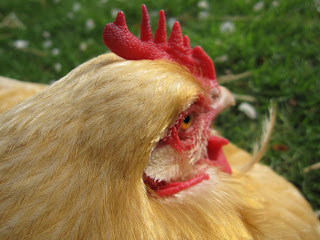 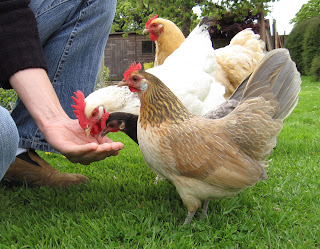 Well we had a lovely weekend even if it was a little chilly. The hens were very friendly and it was lovely to watch them scratching about in the garden. It was a shame to come back to all the stresses of work and students.

House in the Country

This weekend we’re due to house sit for a couple of friends that we’ve known since Landscape College.
They live in the middle of the English countryside with views of fields and sheep and only the odd other house dotted along the road for company.
The house is one of those cottages full of character, low ceilings, wonky doors and an aga.
Best of all they have chickens which is part of the reason we will be there. The other part of the reason is that they have now been burgled 3 times this year. I wouldn’t normally write about things like this on here, but this has really annoyed me.
Our friends are good people with 2 children. They both work as landscapers like ‘im outdoors – working long days in any weather for less pay than most people tucked up in a nice warm office doing 9 till 5.
They kept all their tools in a locked shed. Having them all stolen makes it much harder to earn a living.
Of course what is suppose to happen is the insurance pays out and they buy a whole bunch of lovely new shiny tools which the burglars will then be able to steal – which is why they have been back twice more. But things don’t always work out the way they should, so the insurance didn’t pay out. What really annoys me is the fact that the tools they took in the first place where old and worn and unlikely to sell for very much at all. But they worked and that’s all my friends needed. Shiny things don’t stay shiny for very long when you’re working up to your knees in mud. The burglars weren’t after these tools but the new ones. No skin off their nose, but what do my friends do now?

Anyway that’s enough of a rant. What I meant to say was that as much as I am looking forward to having a little ‘holiday’ its going to be very strange having no computer and no internet access. I won’t be able to study (what a shame) and I won’t be able to try out the new programmes I’ve just loaded.
But I hope to take lots of photos and maybe just have a nice chilled out weekend. Hope the weather is good.
Have a nice bank holiday.

Posted by Wild Creations at 16:04 1 comments