Ok, I’ve been looking at too many photos so I’ve made myself a Flickr page.
I love it. Not just because I can show off my fav photos, but you can look at everyone else’s and there are some totally brilliant photos on there! Its amazing what people have done. And the more I look at other people’s photos the more inspired I get so the more photos I take. I hope that with practice I will get better. But there is no better way of making myself take photos than thinking about putting them on my flickr page. See the flickr badge below which I’ve finally made work! Yay.

Posted by Wild Creations at 12:11 0 comments 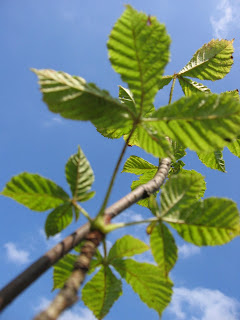 As an ‘artist’ I’m inspired by many things and most of them are from nature. I love the colour of the sky in mid summer and the colour of new green leaves. I find the damp over cast winters dull and wish for crunchy red leaves to smash through in autumn instead of damp piles of brown slush.
My favorite tree has got to be the Horse Chestnut, with its hand like leaves, massive size and deep summer shadow. And best of all its one of the first trees to wake up after the long winter sleep. I wait with baited breath as a green haze seems to cover them and then they unfurl, a splash of green against all the gray and brown of winter.
So you can imagine my horror on reading that ‘Chestnut trees will be gone in a decade.’
I had noticed that many of the chestnut trees in the area had looked rather brown round the edges almost from the time they opened their leaves in the spring, and if we’d had a scorching summer I could have understood it.
But now I’ve read in the local paper how the browning is coursed by leaf miner moths who burrow into the leaf, eating the internal tissue as it goes. Not only that but they are suffering from bleeding canker too.
Due to our short and mild winters there isn’t enough cold to kill off the bugs, so they are attacked season after season until they are so weak they die.
The experts think that collecting the leaves and composting them will help, but so many of these trees are in parks or along roads - they don’t belong to anyone so no one will take the leaves away.
I hate to think that these grand old trees will go the way of the elms, but it looks increasing likely.

Posted by Wild Creations at 11:47 0 comments 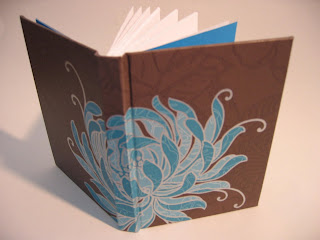 So I’ve finally made my first wallpaper book. And I’m very happy with it. Obviously I’m still learning and it’s not perfect, but the concept works really well, as does the paper itself. And I really like how the flower doesn’t fit all on one side.
I’m looking forward to making more. Although some of the patterns are too big for the little A6 books. I may have to go up to A5!!!
I guess I shouldn’t really go back to B&Q until I’ve used up everything I took last time….

Posted by Wild Creations at 10:42 0 comments

I’ve found another blog to love.
Actually I’ve been visiting for a while and always find it very inspiring if a little odd in places.
I love taking photos and although I’m not brilliant, I don’t think they are all that bad. So every time I visit I Heart Photograph I end up feeling really inspired. The biggest problem is that it always seems to be at work or in the dark evenings when I go, so then can’t do anything about it.
My real favorites are in the Pic of the day, including 6.30, 5.29 and 3.29.
I have to say the best purchase I ever made was my Canon digital camera. I had to buy something as my old camera got wet when I fell in the Amazon River with it round my neck. I love the Canon. It’s small enough to fit in my pocket without being so small that I can’t use it, and its been everywhere with me from holidays to trips in balloons since 2004. I just need to remember to use it more.

Posted by Wild Creations at 20:59 0 comments

So as I said below I’ve always been fascinated with books; not just the making of them but the content too. I adore reading – anyone who knows me will confirm that and I’ve always enjoyed writing my own stories.
About a year ago I did a ‘creative writing’ distance learning course with The Open University which I really enjoyed. I think they’ve got a really nice way of learning with deadlines to keep to and a huge online community. You feel very supported.
On the course I wrote and finished my first short story (I’d written stuff before but never really finished it) and this gave me the confidence to keep going.
So now I’ve joined a writers group who meet at work once a month, which I love, and I’ve been sending stories off to competitions, which I’ve found is another really good way of giving my self deadlines to work to. And I can’t wait to finish the Web Course so I can do the ‘advanced creative writing’ course.
But now I’m about to do something I’ve never done before and send a finished story to a magazine!
The story’s a bit different from what I normally write but fits in with what the mag are asking for so I thought I’d send it, plus they will at least let me know the fate of my story.
The mag is called Mslexia and is for women who write. I’ve been subscribed since Jan and think it’s brilliant. It’s so intelligent and full of interesting information and articles.
I don’t imagine for a second they will publish my story, it’s a bit dark. But you never know if you don’t try.

Posted by Wild Creations at 11:15 0 comments 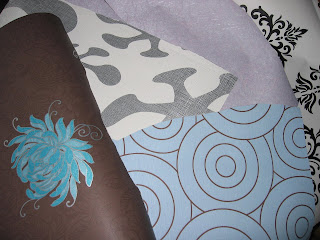 How amazing is this?
B&Q and Homebase and the other DIY stores seem to be quite happy to let you tear off chunks of wall paper and take them home with you.
I assume this is so you can check that the colours match other things in your house or so you can show your spouse before you buy?
But I have to say I’m taking advantage of this fact for my little books. You get some wonderful patterns, textures and colours, and it’s all very tough paper which is perfect for covering my books. And around where I live there are at least 6 large DIY stores.
‘im outdoors say I shall end up on B&Q’s most wanted, but I’m willing to risk it.

Posted by Wild Creations at 12:17 0 comments 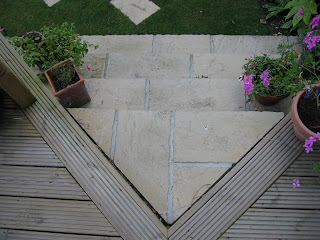 I should probably introduce the Lovely Steve now, who from now on will be referred to as ‘im outdoors.
Without his encouragement and support there is no way I’d even be thinking about doing all this. Without being too gushy I think he is wonderful and I can’t wait till we can move in together.
I should explain that he is a landscaper – hence the ‘im outdoors.
He’s done some really beautiful work including the steps and deck above. You can find him at Thrive Landscapes.

As his web contract is up soon, I’m working on a new site for him, using my new skills!! I hope to include more photos and keep it more up to date. If only I could work out how to right align photos….

Posted by Wild Creations at 19:33 0 comments 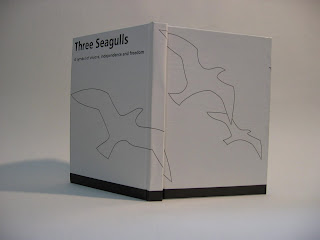 So lets start at the beginning.
I’ve always been fascinated with books; how they are made just as much as the content.
When I was a bit younger (maybe 12?) I took one apart to see how it was put together, and with a bit of help from my dad I made my first book. It wasn’t brilliant and if I remember right it was covered with a grey and white stripy paper bag that came from our local sweet shop. But that’s the other thing I love; using found materials.
Anyway in June I went on a 2 day book binding work shop at a local arts centre called South Hill Park. I’ve been here before and love it with all its workshops, specialists and space.
The work shop was brilliant and I finally learnt how to add spines to my books, something they had been lacking.
And now I can’t stop making them. They haven’t all worked quite right, but I love these two. The first called Three Seagulls is made from the packaging of a seagull mobile my sister gave me for my birthday. The second called Stone was made from the sample photo in a frame my dad bought.
So far they’ve all been A6, which is a nice size to work to as everything fits in your hand. I’m not sure I want to get bigger. 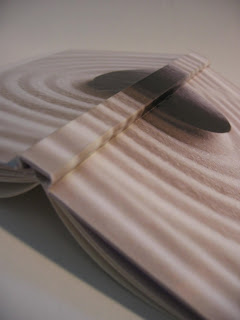 Posted by Wild Creations at 17:19 0 comments

Hello. My name is Penny and my Wild Creations blog is about the stuff I create. At the moment that includes short stories, little blank books, beady necklaces and anything else that strikes me.
Of course that’s not all I do. I’m an administrator at the University of Surrey, and in the time that’s left I’m studying towards a CIW Website Design qualification.

I was getting along just fine with all this stuff when I stumbled across the Crafty Synergy blog about a month ago. I might go as far as to say this changed my life!
It’s a great blog, made up of interviews with lots of people over the last couple of years. The thing they all have in common, is not only do they make things, but they have all made their creativity into a business. They may only be small and some of them haven’t given up the day job yet, but they are doing what I want to do. I still haven’t read all the interviews (work expect me to do stuff there not just look on the net) but I intend to. So thank you for all the people on the Crafty Synergy blog for encouraging me to taking the first tiny steps toward doing what I’ve always wanted to – using my creativity for a purpose.

This blog will, I hope, follow my journey as I make stuff, learn new skills and maybe just maybe start my very own business.

Posted by Wild Creations at 13:43 0 comments