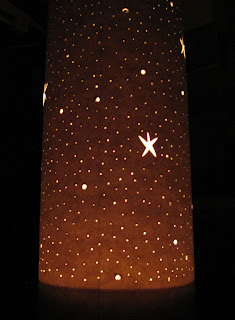 Quite often when I come up with ideas for either stories or things that I will create, I’m not 100% sure where the idea came from.  But when I created a paper lantern to go round a tea light this weekend I knew exactly what had inspired me.
First I saw these beautiful porcelain pierced star tea light holders on Etsy.  I’d seen them before Christmas and fallen in love, but I don’t normally have candles in the house so didn’t buy one.
Then a couple of weeks ago I came across a tutorial on how to make a paper hurricane cover on A Little Hut.  I love this blog anyway and thought it looked like something I could make.
So I combined the two and added my own creative finger print to make my very own tea light cover.  I don't expect that its something I will use, but I wanted to know what the combination of these three things would look like.  And I think that's the important thing about being creative, its the having a go and playing.  It doesn't matter if I don't use this right now.  Maybe later it will feed into something else.

Posted by Wild Creations at 19:21 0 comments

We had the March Writers Group on Tuesday.
I even had something to read out having both printed my work a couple of days ago and remembered my memory stick.
At it was a 3 page story about magic vs technology I won’t put it up, but I do love the cockney demon bunny who features.  It was nice to read something out and have people laugh at the right times.
Also, one of the members who works in the library has saved the 2009 Writers & Artists Yearbook for the group as it was about to be chucked out.  I would love to have a set of books as resources for the group.  It’s just a shame that we don’t have a physical present anywhere to keep them.
This months homework: Margaret wasn’t her real name.  It seemed safer and more sedate than the one she used in her professional life. 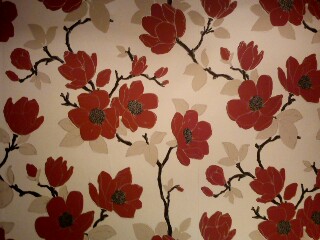 If you’ve been reading this for a while you will know that I quite like wallpaper.  Mostly because it’s thick and great for covering my hand made books, but also because it comes in some really wicked designs.
Anyway I was in a pub about 6 months ago when I visited the loo only to find one wall covered in the most beautiful wallpaper.  After a brief moment of wondering how best to remove the paper from the wall, I did the next best thing and took its photo.  (Several people have been bored with this photo.  Sorry)
Imagine my delight then, when I found the very same wallpaper in a DIY store down the road from the flat this week.  I actually had to get my phone out and check it against the photo I had taken, and there is no doubt – it’s the same paper.  Look out for a hand made book covered in this design, coming soon (Easter?).

Posted by Wild Creations at 13:45 0 comments 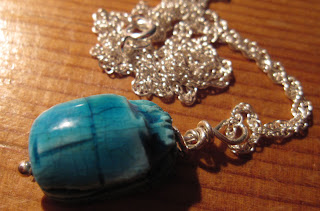 While we were in I was lucky enough to win a scarab beetle bead for reading some hieroglyphics right.  There is nothing special about the bead, they are made by their thousand, scarab’s are after all thought to be good luck, but I love the colour and the circumstances make it special to me, not only were we in Egypt, but it was my birthday.
I’ve now had time to turn it into a necklace.  First I had to drill it – although it had ‘holes’ at each end, they didn’t meet.  No problem for me and my mini drill.  I then used a silver pin to hold the bead, but it was too loose and could have pulled through, so I made a tiny silver washer to hold it in place.  I then made a loop with the tail of the silver pin through which the chain would run, and finished it by knotting the excess round the top.
It’s not perfect, but then neither is the bead, so I think the whole sits well together.  I’m very pleased with it and it will be a grand reminder of a lovely holiday and my 30th birthday.

Posted by Wild Creations at 19:03 0 comments