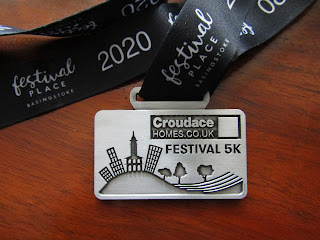 Every year I run the Basingstoke 5k race.  It starts at the cinema and goes through the shopping center, through the business park and round the boating lake.  It's a nice little race and I've completed it 8 times now.

But we all know that this year hasn't been like normal years.  So where I would normally run it on a sunny Sunday in May, this year I ended up running it on my own in the dark on a frosty Friday morning.

If we had run in May I'm pretty sure I would have got a PB, I was running really well then.  But as it's gotten darker in the mornings I've felt more tired when running and my times have gone up a bit.

The race itself got moved a couple of times before they decided to go virtual and although I decided to give it a go I did not have high hopes of a good run.

However it might have been dark and frosty, but it was a pretty morning.  As I was on open roads I had to stop for a couple of cars, and I had a stitch half way round, but when I stopped my watch at 5k I found to my amazment that I actually had a PB - 24:32. Thats 20 seconds off my old PB.

I wonder if it had anything to do with the fact there was no one else there, so I didn't really know how fast I was going and there was no-one to get 'stuck' behind.  When I say 'stuck' I mean you find someone who is running at a nice pace and you stick with them for a while without realising that you could actually be going faster than that, but this pace feels comfortable so you just stay there for a bit.

Whatever it was, it feels good!  I've submitted my results and now wait to see how everyone else did.  The've given us the whole weekend to run it, so results won't be out until next week.

Amendment: I finally got my results - 33 overall (out of 153) and 9th woman.  I'm so chuffed.  Also I LOVE the new medal design.  Such an improvement on the old one and really cute.

Posted by Wild Creations at 11:43 0 comments 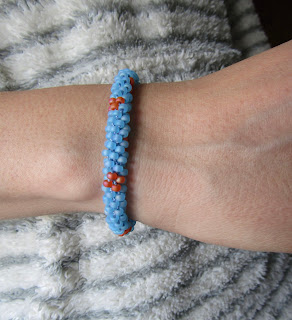 I'd like to do more kumihimo but I've found it very hard to buy beads online.  The colours don't always look the same and you can't see how they shimmer and shine.  What I'm looking forward to is being able to go to craft shows again, where you can see the products in the flesh and find just the right colour.

Here's an example.  I bought these beads online when I was buying something else to bring the postage down.  What I was looking for was a really bright blue and orange, a combination that I love, but when they arrived they were more pastel than bright. 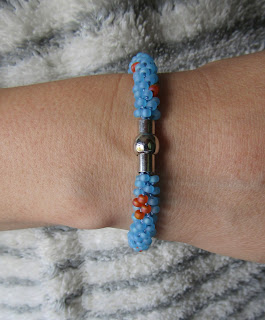 Now don't get me wrong, I still think they are pretty colours, just not quite what I was after.  They still worked well for my dotty pattern (which I created for myself), and another bracelet was born. 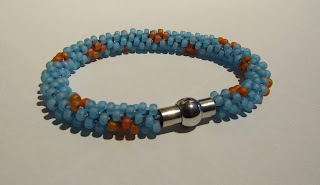 However I am also finding it hard to find findings for my bracelets (the catches etc) but found some lovely magnetic catches on Etsy.  They took a while to arrive (what with coming all the way from Hong Kong) but have finished it off well.

But now I've found out that although the beading is the same length as my rainbow bracelet which fits perfectly, because the magnetic catch has less give in it, the bracelet is much too tight.  But I have learnt something new and will know to add more beads in future if I'm going to use this sort of catch.

Posted by Wild Creations at 15:34 0 comments

I can't call this post more little knitted hats, as I have started making the crochet patterns too now!

They are all starting to get a bit more involved, so I'm not sure how many more I will manage.  After all Christmas making needs to take priority for a bit.

Posted by Wild Creations at 17:04 0 comments