After a lot of thinking we have finally chosen a couple of prints to go up in the flat.
In the end we choose a set of canvases called ‘Glowing Aster’ and an A1 print of ‘Butterfly Palm’ both of which can be seen on ‘im outdoors Etsy page – Alien Planet. 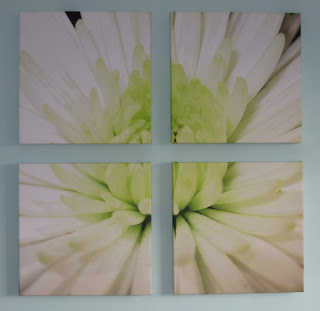 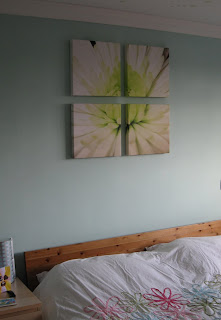 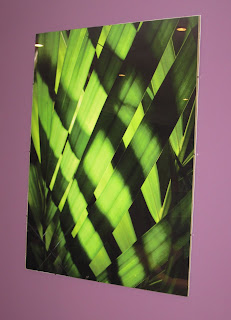 He has such a huge selection of photos – most of which can be seen on his flickr page that choosing the perfect ones for the flat was really hard.
Now they are up, I’m really pleased. The ‘Glowing Aster’ really does glow in the morning sunshine. Stunning. And I went along to pick them up so got to see the work shop where all the printing etc is done – fascinating.

Posted by Wild Creations at 14:39 0 comments

Now I realise that it’s a little early to really be thinking about Christmas, but this is a special case I think. Yes its time to be putting together shoe boxes for Operation Christmas Child again.
Basically they ask you to fill a shoe box with goodies for a little boy or a little girl, then they deliver them to children in need in Africa, Eastern Europe and Central Asia regardless of their background or beliefs.
All they ask is that you fill it with fun and educational things for a child between 2-4, 5-9 or 10-14 and donate at least £2.50 to cover the cost of delivery. I don’t think that’s too much to ask.
Boxes can be dropped off at any point between 1st and 18th November to a number of collection points around the UK so visit their website, Operation Christmas Child, for more details and a chance to make a child’s life just a little better.

Posted by Wild Creations at 12:15 0 comments

The End of the Writers Group?

We had a writers group meeting today. But there is bad news. Anne had said she can no longer chair/run the group and will be standing down from after the December meeting. There is talk of the new English Department taking over the running of the group, but it just won’t be the same.
Without the group I know I wouldn’t have carried on writing between my OU writing courses so I really am in Anne’s debt. Maybe that’s why I’ve agreed to help out with a little surprise project for her – more of that in December.

I’m afraid I cheated with the writer’s group homework. I’m 2 weeks into A363 and am writing almost every night. A little bit of a shock to the system. So rather than do the homework I used one of the activities that the OU had set us last week as something to read out. It’s always to good to get feedback on a piece.


The life history of Guillermo Brown

The church clock strikes eight, so those villages who are awake know without checking that it is six. A cock crows. A body lies across the doorstep of the church, a line of crumb-carrying ants marches across the fedora covering its face. There is a serene, momentary quiet after the chimes cease.

And so ended the life of Guillermo Brown, the most exciting thing to ever happen to him. Finding you’ve been poisoned by your house keeper is not the most pleasant thing, and to find it was with peanut butter filled sandwiches is even more distressing.
As he stood looking down at his former body he wondered what happened now. No dark hooded figure stood nearby waiting to whisk his soul away, and so he was left standing in the early dawn sunlight watching ants.
In this position all he could do was reflect back on his life and how he came to be lying dead on the doorstep of the church. He wasn’t even religious so it seemed a little unfair, but then he had found that life wasn’t fair.
Looking at the back of his head, he suddenly realised that his hair was way too long and topped with the fedora, that he had thought so stylish, was in fact quite silly.
This unsettled him. Now was not the time to be having style issues.
Stepping back from his body he found his foot passing through one of the solid old grave stones which sat near the path to the West Door.
Guillermo was not used to happenings such as these. His life had been filled with dull commutes to a regular job where he knew how to make the photocopier add numbers to pages of printing. A life filled with a needy mother who had died and been replaced by a tyrant of a house keeper.
In Guillermo’s world alcohol was something put in Christmas cakes, and tobacco if smoked at all should be in the form of a pipe. Drugs did not even register and girls were a completely different species to be studied from afar.
As the sun rose higher into the sky and the church rang the half hour, he wondered when he would be found. Today was Monday so no service, and he’d told no one where he was going. Mrs Evans seems to have no interest in where he went on his holidays, only in when he would want lunch. The reason for that was now obvious.
A large crow landed in one of the small round yew trees in the grave yard. He didn’t like the look it was giving his body, like someone eyeing up their breakfast, so he waved his arms at it. Other than it giving him a rather knowing look this had little effect.

The first paragraph was written by the OU and we had to carry on. All the exercise make good points in our writing and help to give us ideas for our Tutor Marked Assessments (TMAs). First one is in on 6th November and I’m starting to run out of time.

Posted by Wild Creations at 15:35 1 comments

So part of last weeks busyness was that I bought a new car. Of course when I say a new car, I mean new to me rather than brand spanking new. (and really, who would buy a brand brand new car anyway?)
It’s another Ford Ka on a 2006 plate and it’s the newest car I’ve ever had. I was a bit nervous at first – it is after all a lot of money, but having owned it for a week I’ve fallen in love. Leather seats, alloys and I’ve just treated it to some new mats and windscreen wipers. 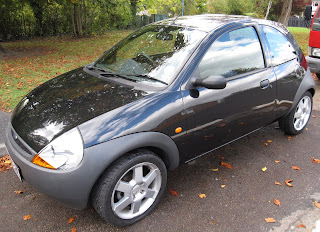 Only problem is I feel bad about my old car. Anyone want a 1998 Ford Ka in blackcurrant purple?

Posted by Wild Creations at 14:25 0 comments

I know it’s been over two weeks since I last posted and haven’t I been busy in that time. But now all my students are here and settled so it should all calm down again.

My mind runs in circles with the problem.
Tying its self in knots and making me feel sick.
They rise out of the autumn mist like huge dragons with burning breath.
And a glimmer of alien light, blue, red, orange and cold cold white.
Who can say what is the best way to live?
They give you an idea of the feel of earth moving under foot.
But don’t go the full extent. No pumping heart or fear of death.
Yet running can be so seductive.
I like the habit of it.

Still not feeling the writing. I hope that this will get better as I get into the course.

Posted by Wild Creations at 12:41 0 comments