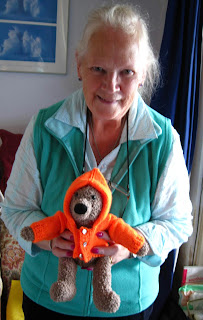 For Christmas a couple of years ago I knitted my mum a bear.  I had wanted to make him a jumper too but ran out of time.
So when my parents agreed to look after Milo for the 3 nights we were in Scotland for the marathon I realised this was the time to make the bear a jumper.

Now most people would just buy their folks some good Scottish whiskey and shortbread while they are up there, but my mum has lost loads of weight this year so she could have a knee operation (which was a grand success) so I didn't want to get them food when they have both done so well losing weight. 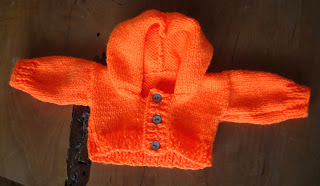 They also recently got themselves matching fleeces in bright orange and I loved the idea that the bear could also have a matching jumper.
Mum seemed pretty chuffed with it and put bear straight into it.  I hope it keeps him warm.

Posted by Wild Creations at 14:32 0 comments 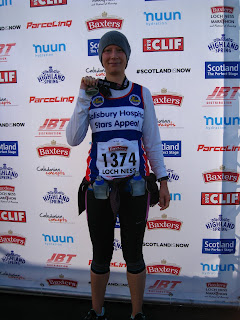 After 16 weeks of running through heat waves and down pours it was finally time to run The Marathon.


We flew to Inverness on Friday night so we could collect my race number on Saturday and chill out a bit.
We accidentally ended up walking down the finishing straight on our way into the race village, a bit like something Chris Boardman might do before a stage of the Tour de France.
In the race village we picked up my race number, 1374, then had a mooch around the expo. Listening to the experts talk about how cold it was and how we should layer up I ended up buying a light jacket, which I was very glad of on race day.
Macaroni for lunch then we had a wander round the botanical gardens, dodging the rain showers.
On Sunday we were up early. The buses for the start left at 7.30am so we needed to be there by 7.00. Here I said good bye to ‘im outdoors and had to hope I would see him again later that afternoon.

The coach was nice and warm with wonderful views of Loch Ness as we made our way to the start. I’m not sure how many coaches they used but there were over 3000 runners to transport to the top of a big hill in the middle of nowhere. As you can imagine the queue for the loos was massive!

We had about an hour standing around before the race started, but queueing for the loos and bag drop etc filled the time and before we knew it we were off, running over the start line to the sound of a pipe band.
We were pretty lucky with the weather, mostly dry except for a few heavy down pours at miles 10/11, 15 and the last couple of miles. The wind didn’t make an appearance until much later in the day for which I was very grateful.
The scenery was beautiful, all the stuff you’d expect to see in Scotland really.
But the race was mostly in my head. The counting down of the miles. Reminding myself of how much I’ve raised for charity and the wonderful people who supported me. The little games you play with yourself to keep yourself going - I can walk for a bit at the next mile marker if I just keep going now. Trying to ignore the pain in my knees/hips/feet/ankles. 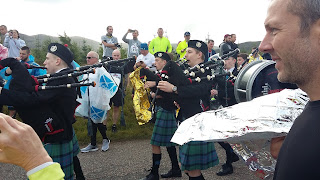 As I came to the mile 24 marker I knew ‘im outdoors would be somewhere ahead. No walking now. I didn’t know when I’d see him but I was determined to run past him. It started raining but I kept going. This mile seemed to last forever but finally there he was smiling at me. Just a mile left. The rain was coming down and I had to keep running. My mantra “all you have to do is finish” said over and over again. With the finish line in sight I was in tears.
I couldn’t believe I’d made it, finally finished what I set out to do last January.
This is the hardest thing I’ve ever done. Not just the 26.2 miles but the 4 months of training leading up to it. I can’t imagine ever wanting to do that again, but I’m glad I did do it. Glad I managed to finish it and amazed at how generous everyone has been in sponsoring me.
Thank you to everyone who supported me over the last 4 months, particularly ‘im outdoors who hasn’t moaned once, even when I’ve woken him up getting up early for a training run, or asked him to sort washing or some other chore because I was too knackered. And who came and stood in the rain and smiled at me when I needed him the most. Thank you. 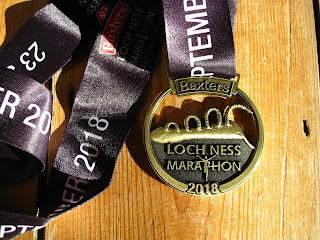 Posted by Wild Creations at 09:36 0 comments