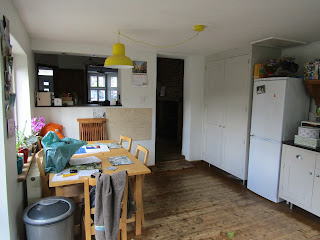 When we bought the house, 5 years ago now, the kitchen was a huge selling point for me.  Very spacious, with lots of work surface and still room for a table and a range cooker.

I loved it.  My only ambitions for it was to add a decorative door to the freezer and kick boards to the cupboards. But to do that ‘im outdoors would need some space to work so we had to build a workshop first. 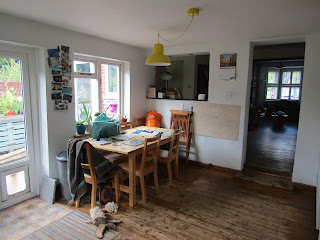 However as we lived with it we realised there were some other shortcomings. It was very cold in winter, and there wasn’t a proper extractor fan over the cooker. The floor was getting very sponge, the kitchen door had gaps round it and we kept finding slug tails on the worksurface! 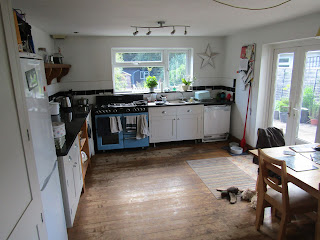 I can’t remember now which of us suggested bifold doors across the end wall, but once it was said it couldn’t be unsaid and I started thinking about how the layout would have to change to make it work, that wall currently having the oven and sink against it. 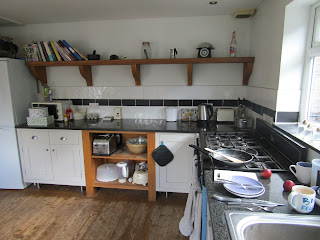 This was around the same time that I was sitting on the sofa with a fire going, thinking about running a marathon in Scotland as I watched the snow come down outside.

Once I’d cracked the layout issue it was a case of working out if it was worth it. But we were going to have to do something in there, even if just to sort the floor out, so we decided we might as well do it properly. 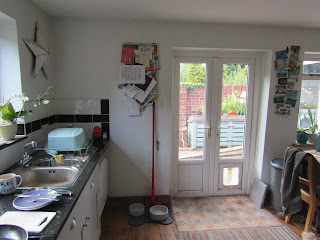 This was a much bigger project than the others we’ve tackled so far and involved more trades too, meaning we’ve had to schedule work in rather than doing it all ourselves. However it’s been lovely to support our local community following on from lockdown when so many people couldn’t work, including ‘im outdoors, as much from lack of supplies as anything. 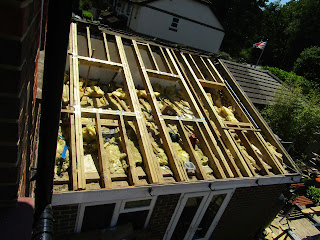 So after 2 years of planning and then thinking it wouldn’t be going ahead due to Covid it was pretty exciting to start the project last June by having the roof replaced and 3 skylights fitted.  This all happened without taking the internal ceiling down so we could continue to use the kitchen. 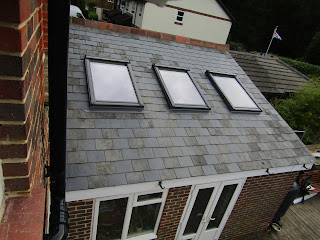 At this point we could have stopped if needed, but everyone assured us that there wouldn’t be any issues, even with Covid, so at the end of July we empted the kitchen (turning the living room into a ‘kitchen’ with the utility room for water/washing up) and knocked the end wall out! 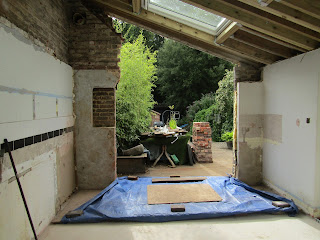 Things like putting in the underfloor heating and some of the electrics happened and then we had to wait for the windows and the massive doors. 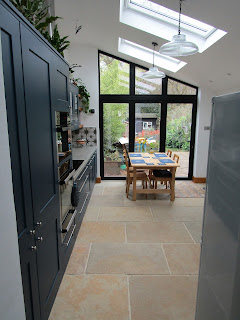 They were due mid September but due to issues with supplies it was the beginning of November before they arrived and were fitted!  After all this waiting when we couldn’t do anything as it wasn’t water tight we swung into action, insulating, plasterboarding, finishing the electrics and getting everything ready so the plasterers could do their thing at the beginning of December. 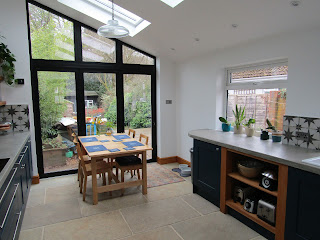 Suddenly we had something that actually resembled a room again!  A lick of paint and before Christmas the kitchen units and appliances were delivered.  Best Christmas present ever!

We've tried to keep and re-use as much of the old kitchen as possible, so now ‘im outdoors had the fun job of fitting it all together like a massive puzzle. 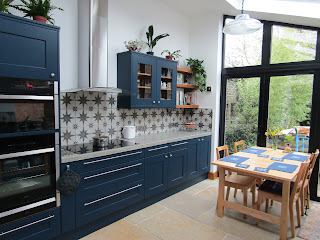 If that wasn’t enough we’d also decided to make our own worktops from concrete!  We had black stone worktops in the old kitchen, which I loved but wouldn’t fit in the new space.  Concrete would give us that solid feel and hopefully a nice finish. 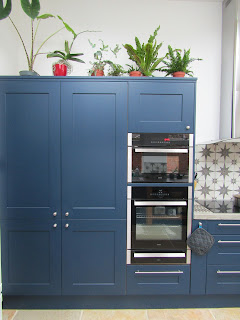 They took a little more work than a normal worktop and had to be made one at a time in sections, but I really love them. 'im outdoors got such a good finish on them, they reflect the tiles!  But man they were heavy and I’m glad we only had to lift them a few inches to get them in place.

With the worktops in place we could tile the walls and do the last little bits and bobs. 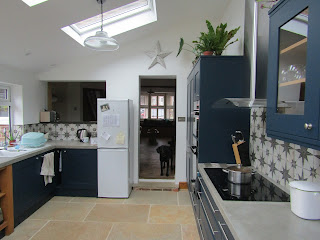 Suddenly we had a kitchen and I could fill it up with all our stuff and a selection of plants and finally allow the living room to be a living room again. 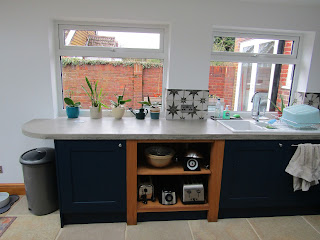 The whole thing took over 6 months to complete and has been a little trying at times.  But we are incredibly lucky that we’ve had the space to allow us to function in a relatively civilised way and that ‘im outdoors has been able to do so much of it himself. 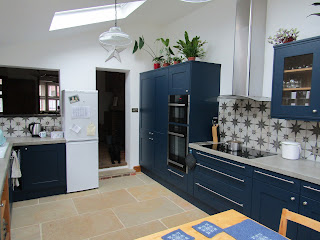 I’d like some time to enjoy the house being back to normal, but rewiring starts next week - we decided it was best just to get it done.  Then we can start to think about the garden! 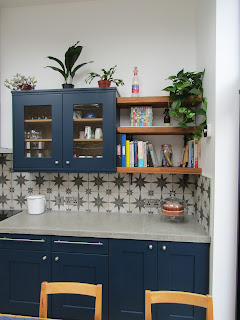