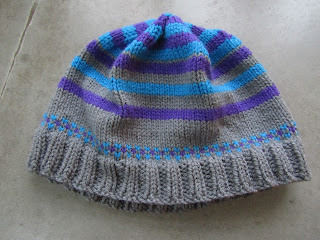 In July I posted a hat I'd knitted for running in.  I was pretty happy with that hat, so decided to try out some other colours, but then I started working on another project and it sat on the table for ages half finished.

Then when I went back to it I ran out of grey wool, so instead of a grey hat with some purple and blue detailing I ended up with a hat with purple and blue stripes.  Nothing wrong with that, but not quite what I was aiming for. 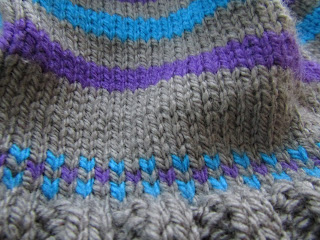 Not to worry.  I still think its quite a nice hat, so instead of upsetting 'im outdoors and undoing it, I'll add it to the pile of hats due to be sent to Hats for the Homeless in the next week or so. I hope someone will find it useful.