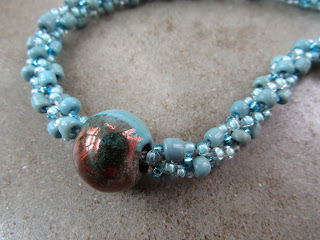 When I went to The Big Bead Show last year, I found and bought a large pretty glazed bead.  I wasn't sure what I would do with it exactly, but I thought it might work nicely in the middle of a kumihimo necklace.

Having made the Sea Spray Kumihimo bracelet for my friend last year, I started to wonder if I could use the bead in the middle of a similar design, especially as the colours were very close. 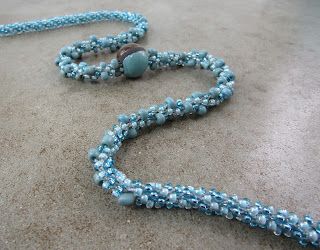 I started with working out the design I wanted to use.  This had to take into account the fact I wasn't sure I'd have enough beads, and it would be hard to get replacements.

Once I had an idea of what I wanted to do, I started making it.  So far so good.  But then I got to the part where I added the bead and something went a bit wrong and I had to undo it and try again.  More issues.  So I gave up for a bit and it sat there half made for ages (weeks).

Finally, I didn't have anything more important to do and I decided to get it sorted.  I undid the bit that had gone wrong, and set everything up again, and started work.

This time it worked fine and I soon had a finished necklace.  I liked the colours and the design seemed to work and I was pretty happy, until I held it up with the bead in the middle and realised that one side was longer than the other!

I had assumed that using the same number of beads would mean both sides came out the same size, and I guess if I'd been using uniform beads this would be the case, but the slightly larger green beads are all over the place size wise and I guess it pushed the pattern out.  If I'd measured it as I went I would have realised and stopped before it got too long.

Lesson learnt.  Now to decide if I undo it a bit and fix, undo it completely and make it shorter or just leave it as is. 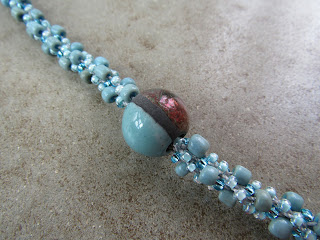