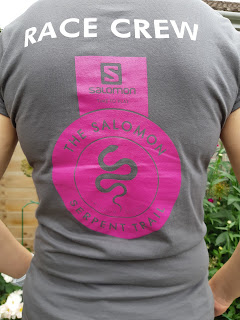 Today my name is Marshal.  My hands are sore from clapping, my voice hoarse from shouting.

I have just made sure that hundreds of runners have made it round a left hand turn a couple of miles from the finish of The Soloman Serpent Trail race.  A race with 4 different distances: 10K, 20K, 50K and 100K which meant I was looking after that left hand turn for nearly seven hours.

I arrived at my post at 12:20 to find the first runner from the 50K group had just been through.  The second came through minutes later.  From then until 3pm it was a constant stream of runners.  Some looking in better shape than others. 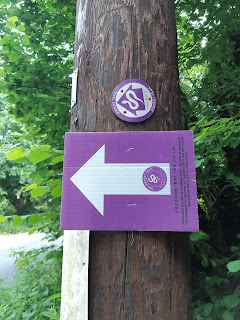 At about 2.30 the 10K racers came haring through, a very different type of race from everyone else.

At 3pm things slowed down.  Then, at about 4pm, the first 100K runner came through.  From then on it was loan runners.  Either 100K runners near the front of the pack, still running and looking good.  Or the tail end of the 50K pack, reduced to walking, but still going to finish.

I cheered each and everyone on and told them the two most important things possible.  1. turn left here. And 2. You've got this, only a couple of miles to go. 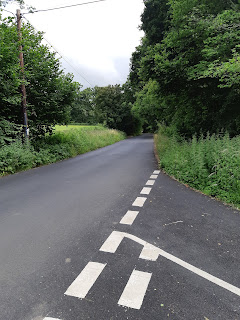 At the end of 2020, my plan had been to run the 50k race.  And I still hope to.  But while I build up my running again, the next best thing than racing is supporting other runners to race.

I hope my cheering made a difference, and I hope they are all proud of what they achived.  This was no mean feat.